The hearth fired kitchen was the center of daily activity.  Colonials went to the kitchen as early as possible and started building up the fire to an optimum 400 degrees. A large iron swinging crane allowed kettles and pots to hang over the fire.  Two hundred years ago, the main meal of the day was a hot dinner served in the middle of the day around 2:00 pm. The late evening meal was known as supper and consisted of cold foods and leftovers out of the pot.  Breakfast was prepared by adding fresh peas/vegetables and oats to the pot of leftovers from the day before and heated, thus the nursery rhyme.  Even though food in pots was covered by lids and eaten throughout the day and into the next, food poisoning was avoided by using fresh food and proper heating. 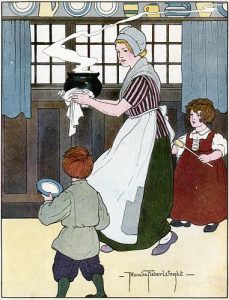