Before it was Crewcorne, Covin’s Ferry, or Morrisville, the area at the falls of the Delaware River in Bucks County became the starting point for land measurement in Pennsylvania.
An outcropping of massive gray boulder is marked by a monument and bronze tablet stating that, “Near this spot stood the white oak tree that marked the starting point of the survey of the first tract of land purchased from the Indians by William Penn July 15th, 1682, on land in the Tenure of John Wood and by him called Graystones.”
Earlier the falls had been a strategic location for camps by the Lenni Lenape Indians, and in 1724 a settlement for a small group of trappers.
A major flood in 1787 carved out a creek that left an island completely separated from the Pennsylvania mainland.  Because it was at the fall line, the fast-flowing stream dropped eight feet from where it left the river to its return into the Delaware, providing a source of water-power to turn water wheels and grindstones in mills.   Adam Hoops, a Philadelphia merchant and his family established a gristmill in the mid-1700s.
Subsequently, a sawmill and other businesses were added to what was to be known as the “Delaware Works.” This was part of the property that Robert Morris acquired in 1791.  Hoops also constructed a home about a half-mile from the river.  This home, “Summerseat,” was to be early American history.
Thomas Barclay, Hoops’ son-in-law, became owner of Summerseat in 1773.  Barclay was the owner when George Washington established his headquarters at Summerseat on December 8th, 1776.
Washington had just completed a retreat across New Jersey with Sir William Howe, commander of a large force of British soldiers and Hessian mercenaries, in pursuit.  Washington commandeered boats from miles along the river to ferry his troops across, keeping the boats on the Pennsylvania side.
Washington remained at Summerseat until December 14th. It is almost certain that Washington began planning his historic attack on Trenton, which then was guarded by 1500 Hessians under Colonel Johann Rall, while still at Summerseat.
Two prominent early owners of Summerseat were Robert Morris and George Clymer, both signers of the Declaration of Independence and the Constitution. Summerseat is unique in having had two signers of both documents as owners.
Morris acquired Summerseat and the surrounding acreage with the idea that the “Falls of the Delaware” would make an ideal site for the nation’s capital, being about halfway between the two major cities of the time, Philadelphia and New York.  It was also ideally situated to be reached by water, since boats could proceed up the Delaware as far as the fall line, and the stage line between Philadelphia and New York passed through the town to the ferry that crossed the river.
In more recent years the major north-south rail line and the Route 1 highway were routed through Morrisville and industry thrived, the town becoming a rubber, plastics, and tile manufacturing center.

Written by James Murray and published in the Morrisville Times, 1/28/11 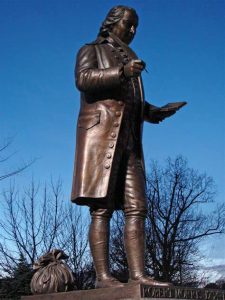