A Short History of Summerseat 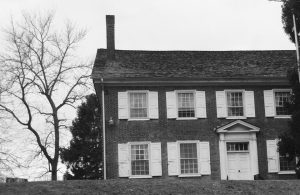 Few homes in America have been owned by, or occupied by such important actors of the eighteenth century as Summerseat. Summerseat was General George Washington’s Headquarters in December 1776, owned by two signers of both the Declaration of Independence and the American Constitution Robert Morris and George Clymer. During General Washington’s time there, Summerseat was owned by Thomas Barclay, who would become America’s first consul overseas and who also negotiated the first treaty for the United States with a foreign nation, Morocco. John Adams and Thomas Jefferson, with whom Barclay worked while in France, recommended Barclay for this position. Summerseat was built in 1765 by one of America’s first self-made men, Adam Hoops, who was born on the Pennsylvania frontier about 1708, and became one of the colonies’ wealthiest men by hard work and sheer determination.

Summerseat is perhaps most famous as the Headquarters of General George Washington from December 8th to 14th, 1776. The well-known directive, “that all the boats and water crafts should be secured or destroyed.,” was issued by Washington while he was staying at Summerseat.

General Washington had not been successful in 1776; he was a defeated general, and he would no longer have an army in the new year as the enlistments of most of his hungry, rag-tag troops was over on December 31, 1776. Charles Willson Peale, the iconic painter of George Washington, camped on Summerseat’s property while General Washington was at Summerseat.
When Washington arrived at Summerseat, he wrote a letter asking General Lee to “Come to this place”, (Colvin’s Ferry, today’s Morrisville), as Washington was planning to defend Philadelphia from the British. General Lee replied to Washington, saying he thought he’d stay where he was because he couldn’t imagine that the British would attack Philadelphia.
In the fall of 1776, members of the Continental Congress were plotting against General Washington because they believed he was a failure.
Many generals rode across the land that is now MR Reiter School property and up the marble steps of Summerseat: Thomas Mifflin (future governor of Pennsylvania, Lord Stirling (William Alexander), Henry Knox, General “Mad” Anthony Wayne, Cadwalader, Hugh Mercer, Israel Putman.

General Washington sent 20 letters from Summerseat.
Douglas Freeman in George Washington: A Biography wrote of Washington while he was at Summerseat, “He now had rested and conquered the confusion of mind that had plagued and paralyzed him in November.” Priscilla Roberts wrote in Summerseat, 1764-1791, “Perhaps the comfortable furnishings of Summerseat and the support by the Barclay family and servants contributed to Washington’s new-found strength of Purpose.”
We all know the story of how General Washington did not go to defend Philadelphia; he turned north and went up the river. 14 days later he changed the world with his success in Trenton on Christmas night, 1776.
General Washington sent word across the river as soon as the battle was won, to Thomas Barclay so he would know that it was safe to stay at Summerseat. General Washington also enclosed a letter for Barclay to take to Robert Morris to tell him that it was safe for Morris to stay in Philadelphia.
British General Cornwallis later said the General Washington had won the war at Trenton.
In 1781, General “Mad” Anthony Wayne held a Court of Inquiry in Summerseat’s dining room with members of the Continental Congress and found two men guilty of spying for the British. They were taken to Summerseat’s basement to await their hanging the next morning along the Delaware River.
Written by Sharon Hughes, Past President, HMS